Ediscovery
Features
Technology
Professional Services
Pricing
Review
Case Builder
NEW
Resources
Help Center
Pricing Guide
Blog
Company
About Us
Events
Careers
Investor Relations
Press
Partner Program
Contact Us
Login
Get a free demo
2013
Launched in 2013, DISCO was designed the way lawyers want to work
4.6+ PB
Over 4.6 PB of data uploaded
to DISCO
170+
Over 170 of the Am Law 200
use DISCO
900+
DISCO has been embraced by over 900 law firms

World-class engineering with a deep love and respect for the law.

DISCO was initially developed at a litigation boutique in Houston. It was born out of the firm’s frustration with conventional ediscovery tools that were slow and difficult for lawyers to use. Instead of being forced to adapt our work methods to technology, we wanted to invent technology that works the way lawyers work. DISCO was the result, and today we are the fastest-growing ediscovery solution in North America.

As the leading provider of software as a service solutions developed by lawyers for lawyers, DISCO is reinventing legal technology to automate and simplify complex and error-prone tasks that distract from practicing law. DISCO has been embraced by more than 400 law firms, including 75 of the top Am Law 200, as their first choice for innovative technologies that enhance the practice of law to help secure justice and win cases.

(success is built on a strong foundation)

A lawyer with a B.S. in computer science, Kiwi earned his JD at 19 from Harvard Law School, clerked for Judge Harris Hartz of the U.S. Court of Appeals for the Tenth Circuit, was a PhD student in economics at Stanford, taught corporate law at Northwestern, and was a founding partner of Camara & Sibley LLP in Houston. His articles on constitutional law, corporate law, and international law have been published in the Journal of Corporation Law and the Yale Law Journal.
Chief Executive Officer
Kiwi Camara
As a DISCO founder, Kent articulates our vision for technology that empowers great lawyers to customers, partners, and employees. He was previously presiding partner at Camara and Sibley, practiced at Vinson & Elkins, and helped found the Houston offices of Hogan, Lovells and Pillsbury Winthrop. He is a registered member of the Cherokee Nation and expert on central Texas BBQ.
Chief Compliance Officer
Kent Radford
As chief operating officer, Sean builds and leads a centralized operations team to improve DISCO’s cross-functional business processes, goal alignment, and communications. Prior to DISCO, Sean spent nearly seven years at Upland Software, where he served as executive vice president of the workflow automation business unit and global chief technology officer. Previously, Sean was chief information officer and led global distribution at FileBound Solutions and director of technology development at GiftCertificates.com
Chief Operating Officer
Sean Nathaniel
With more than 25 years building highly scalable technology platforms, Keith leads the DISCO engineering and product teams. Keith has a proven track record of guiding early stage start up technology through substantial growth. Most recently Keith facilitated large-scale growth at Spredfast, a market leader in social media management. Prior to that, Keith spent seven years at StoredIQ, where he developed a highly-scalable categorization and indexing platform for the legal tech market that was later sold to IBM.
Executive Vice President Software & Chief Technology Officer
Keith Zoellner
A 17-year veteran of the legal tech industry, Neil combines a deep understanding of law firms, legal departments, and the legal tech industry with a passion for delivering revolutionary legal technology. Before joining DISCO, Neil was vice president of product marketing for Recommind, where he was responsible for product marketing, strategy, and competitive intelligence across all of Recommind’s product lines, including ediscovery, information governance, and enterprise search.
Chief Marketing Officer
Neil Etheridge
Andrew has a proven track record for building out high performing teams and driving significant growth in emerging and mature markets. With more than 20 years of experience in legal technology, Andrew has served in a broad array of leadership roles, including COO of an AI leader in legal affairs to serving as President of EPIQ DTI’s $500M+ global ediscovery division. A former practicing attorney, Andrew has a BA in English Literature and Business and received his JD from the University of Minnesota.
Chief Revenue Officer
Andrew Shimek
Before joining DISCO, Michael served as the Chief Financial Officer of Offers.com and was instrumental in executing the sale of Offers.com to Ziff Davis, LLC in 2015. After the acquisition, Michael served as Global Head of Finance, Ziff Davis B2B. Michael holds a Bachelor of Science in Economics with concentrations in Accounting and Economics from the Wharton School of the University of Pennsylvania and a JD from Temple University School of Law.
Chief Financial Officer
Michael Lafair
Chief Product Officer Kevin Smith brings a bold and visionary approach to DISCO product strategy. Working with customer and product delivery teams, he ensures products are aligned to current and future market needs, explores opportunities to broaden DISCO’s offerings through partnerships and acquisitions, and accelerates the adoption of DISCO AI at every part of the customer journey. Smith previously served as senior vice president, portfolio strategy and operations for Carbon Black. He also spent seven years at CA Technologies.
Chief Product Officer
Kevin Smith
Kristin leads DISCO's team of services professionals to deliver extraordinary value to customers every day. She brings her business leadership, operations, and strategy expertise plus 14 years of experience in legal technology consulting and support to DISCO's team. She spent seven years at Google leading litigation support operations practice. Before Google, she spent seven years as a consultant for many Fortune 500 companies and Am Law 200 firms.
VP of Customer Success
Kristin Zmrhal
Aaron joins DISCO from Bazaarvoice, where he served for more than 6 years as an HR leader. During his tenure, Bazaarvoice repeatedly won awards for its culture and was repeatedly recognized as a Best Place to Work in Austin. Before Bazaarvoice, Aaron spent 11 years at Dell, AMD, and Hewlett-Packard after starting his career at Ernst & Young. Aaron is a long-time Austinite, with a BA and MBA from UT.
Chief Human Resources Officer
Aaron Trull
Melanie Antoon leads the Professional Services group at DISCO, comprising the project management, data operations, and forensics teams. She is a leader and technologist with over 18 years of experience working in e-discovery, and is passionate about building exceptional client services teams. Before joining DISCO, she was the Senior Vice President of U.S. Operations at Inventus. She has a B.A. from the University of Wisconsin-Madison and an M.S. in computer science from DePaul University.
Senior Vice President of Professional Services
Melanie Antoon
Melissa Frugé is responsible for all of DISCO’s worldwide legal matters and leads efforts for the company to engage in government relations and strengthen its voice in the legal industry. She was previously the Chief Legal Officer of FinancialForce, where she was responsible for all legal and risk matters and served as the executive sponsor of its Diversity & Inclusion Committee. Melissa earned her J.D. from the Santa Clara University School of Law and her B.A. at the University of Southern California.
Senior Vice President and General Counsel
Melissa Frugé 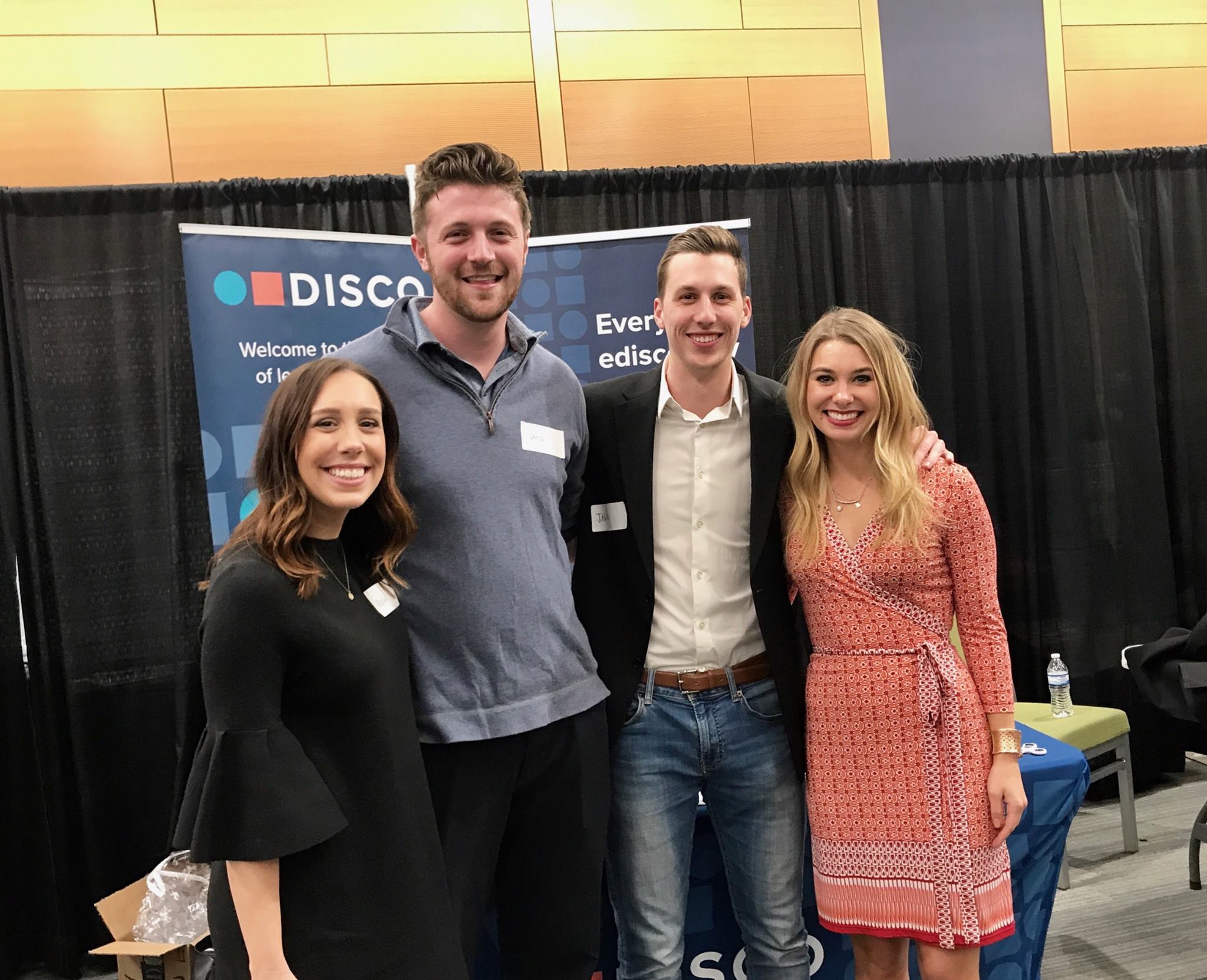 Located across the country, and growing

DISCO isn't your average legal technology company. Here, creative thinking is not just a buzzword — it's a principle of our company's culture not to follow the status quo, but to push the limits of technological boundaries. At DISCO, we are animated by what we call the inventor’s spirit: a constant desire to imagine what the world should be like and make what we imagine real.